Until the end of August, the artists had to sculpt the work in full size in soft material. The Ambassador of France to Belarus Nicolas de Lacostas with his wife Maria and the director of the Sedon BLR FLLC Ongan Mordeniz arrived with a pleasant mission to the Shchuchin region. In the Palace of Children and Youth Creativity, guests were greeted warmly, like old friends. First — a small tour of the architectural pearl, a mandatory visit to the Museum of the History of Shchuchin, where the exposition contains materials about the captain of the French army Charles de Gaulle, who during the First World War (from July to September 1916), after being wounded, was in Shchuchin in a German camp for prisoners of war. After — in an official setting, the signing of the documents necessary for the manufacture of a monument to the general.

-Today is a significant day, stressed Aleksey Sadovsky, chairman of the Shchuchin regional executive committee. — The project, which we have dreamed of for more than five years, is finally gaining legal force and entering into an active phase. It will help expand and strengthen our ties, increase the influx of tourists, remind us of how our history is connected and that the concepts of honor and courage have no statute of limitations.

-The idea to erect the monument arose several years ago, when there appeared precise evidence that the place of imprisonment of the future politician during the First World War was the city of Shchuchin in the Grodno region, says Elena Pasyuta, deputy chairman of the Shchuchin regional executive committee. A lot of research work was done to make sure that the documents and letters are about our Shchuchin, then — a competition of sketch works. The best project was unanimously recognized as the project of the monument of the creative team consisting of the sculptor Nikolai Bairachny and architects Valery Musienko and Elena Demid. The artists reflected not only the fact that Captain Charles de Gaulle was imprisoned in Shchuchin at that time, but also the scale of the personality of this outstanding statesman of France. This, according to the guests, is the only monument where the President of France will appear in the form of a young captain — purposeful, unbroken. 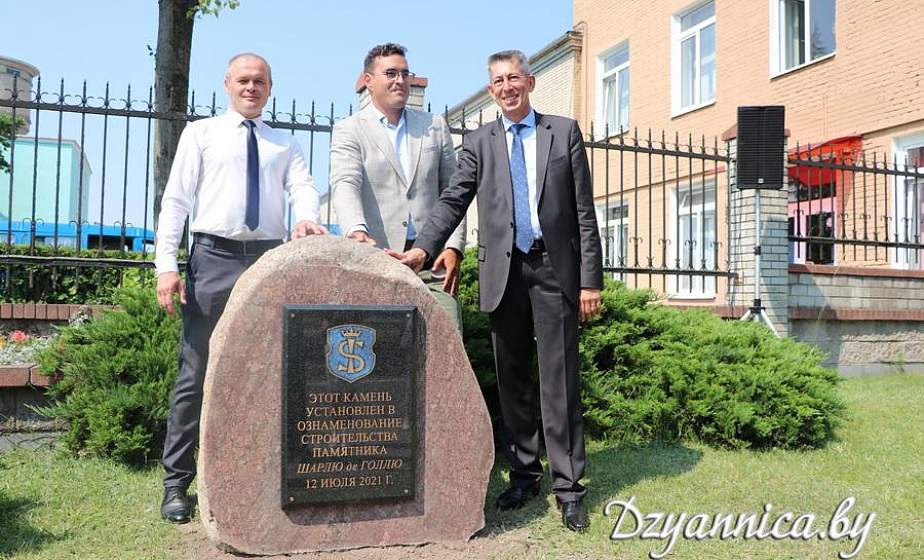 Until the end of August the artists had to sculpt the work in full size in soft material, and after approval by the Republican Artistic Expert Council for Monumental and Monumental-Decorative Arts under the Ministry of Culture until the end of October — in bronze. During this time, Shchuchin specialists will prepare a pedestal of stones and concrete. The grand opening of the monument is expected at the end of November.

This monument is a piece of France on the Shchuchin land, said Nicolas de Lacoste. I am sure he will contribute to the development of Belarusian-French relations in the cultural sphere and will become an occasion for a closer dialogue.

The ambassador was supplemented by his wife Maria, who never ceases to admire Belarusian architectural masterpieces and heartfelt people. She and her husband travel a lot to the cities and villages of Belarus as ordinary tourists, studying the history of the country.

-I want this project to bring our two countries closer together, thanks to the past, — said Ongan Mordeniz, director of the Sedon BLR FLLC, the project sponsor. We must give life to a new page in history. I discovered Belarus in 2007 and was delighted with the striving of Belarusians for knowledge, respect for history and roots. It’s great that the great Charles de Gaulle united us from the past.

The guests presented the Museum of the History of the Shchuchin Region with copies of unique photographs recently found in a private collection, which depict the French national hero during his stay in Shchuchin. And then everyone went to the place where the monument was erected near the territory of JSC Avtoprovod Plant, where a prisoner of war camp was located during the First World War. The Ambassador of France said warm words about his national hero in the Belarusian language. He expressed his deep gratitude for the support in the implementation of an important project of the local authorities and his fellow countryman Ongan Mordeniz, who finances the project.

-This monument will remind everyone of the stay of one of the most famous Frenchmen on the Belarusian land, he said. — Being in difficult circumstances, the future President of France did not lose hope and did not lose heart. This is the main message to us, descendants, which is still relevant today.

So the great Frenchman, 105 years later, «returns» to Shchuchin, uniting Belarusians and French, reminding everyone living today of patriotism and greatness of spirit. After the call «from the bank», the Internet fraudster called a resident of Lida and introduced himself as the head of the capital’s criminal investigation department. And she believed